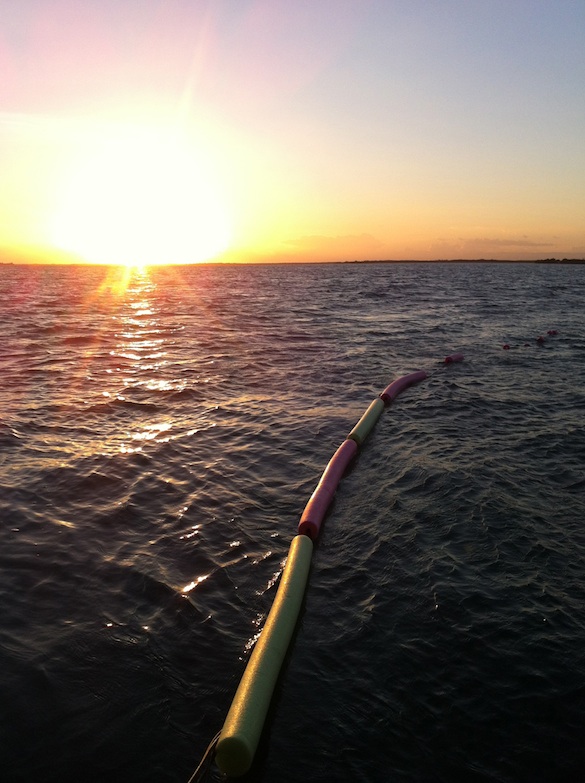 Narrative:
After a long day of finicky experimentation in the sun, I returned to the bay to wash salt water from the equipment and to hose down. From 16°30’37″N, 88°22’1″W I looked out on a tranquil evening scene and decided to attempt one last recording.

I had recorded throughout the day in shallow coral seas off the coast of Belize. I’d attempted to capture a spatial impression of the clouds of clicks and pops produced by crustacea and who-knows-what; a sound present at almost every ocean location on Earth.

In the evening bay one boat was at anchor, a jet ski idled around and I saw a couple of tiny and distant fishing boats. Yet the underwater acoustic landscape was dense, quite different from the gentle evening scene that played out above the water.

I assembled this sequence of recordings to share my experiences of these two places. The recordings made among the shallow reefs are filled with crustacea sounds punctuated by communication calls between toadfish and an occasional dolphin.

Other impressions of this remote environment came to light when I auditioned the recordings back in the studio. The hydrophone rig became a barometer for other encounters. The tiniest brushings with what appeared to be fluffy fingers of soft coral revealed their harsh surface, rasping and gritty. As the evening currents shifted and strengthened “strumming” hydrophone cables conveyed the power of the underwater gales.

Many thanks to Francesca von Habsburg and the T-B A21 Academy for the opportunity to record in these places.