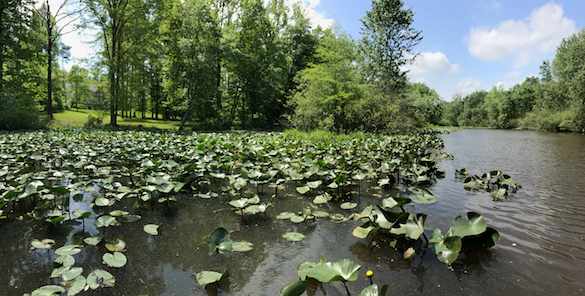 “You really should hear the frogs,” suggested our hosts. They had taken us to their country house on a warm evening in May 2017, situated beside Little River, Beaverdam, Virginia.

Late that evening, we were led down the lawn, through the darkness towards the river nearby, a few hundred yards from the house. As we neared the water, we began to hear calls from a large scattered array of frogs, littering the shallows of the near and far banks of the river. Two main species were present; the Green Frog (Lithobates clamitans) was the most common, its twangy call sometimes compared to a loose banjo string. This call is often repeated a few times, each decreasing in volume. The other call, a more sporadic, slightly comedic deep tenor is from the American Bullfrog (Lithobates catesbeianus).

Naturally, I wanted to get a recording. Problematically, my sound equipment had been left in Durham, North Carolina, two hundred miles away. I was over from the UK working on a documentary in NC and I only had a phone without additional mics, so had to make do.

The next day, listening back to the functional recording I’d made on my phone was deeply underwhelming. I decided that I really needed to drive back to Durham, get my sound kit and return to Little River and have another go the following night.

This recording was made with a spaced pair of DPA 4018s into a Zaxcom Nomad.