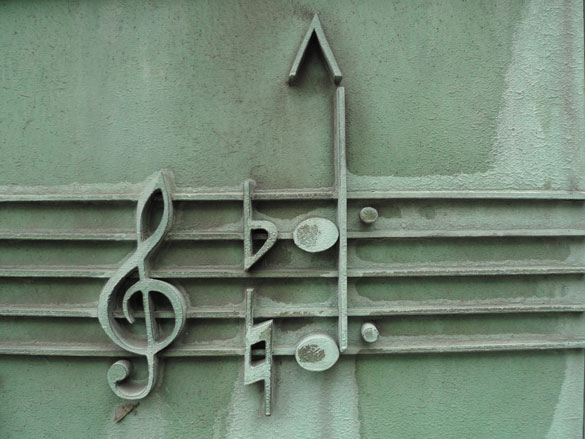 “I always recorded sounds since my PA gave me a cassette recorder when I was about 15 I think. With Derek Jarman I liked to record the sounds from the filming because often we had no official sound recordist, and he used to think the Italian way and record mute anyway. From Caravaggio [1986] on I was always on location with him if possible. Derek had a habit of super 8 mm filming whenever he could because it was cheap, fun, and easy-ish to organise.”

1. Lindsay Anderson recorded at the memorial service for Andrei Tarkovsky [1932-1986] at St. James’s Church, Piccadilly, London
The Last of England…

Hot. Summer. For once I’d been unable to record Derek shooting the Super-8 set ups for The Last of England [Derek Jarman, 1988] as I was getting extras for David Leland’s film, “Wish You Were Here” [1987]. I was walking down to Shipleys as you did, and I bumped into Derek. He said, “come and see what we’ve been doing”. I’ve got hours of film, and Cerith Wynn Evans is editing it. So, around the corner to Don Boyd’s office by the Photographers Gallery. Upstairs. Cerith is busy looking at the longest trains in the world crossing a road, shot by Richard Heslop. Fantastic footage, never made the film. This is the beginning of The Last of England for me. I set up a new workstation James bought me, and an amp and a Revox. I work at night, when the office is closed. Adam has papered the walls of the office in huge rolls of white industrial paper. Adam writes up the q sheets, scene by scene, so finally all I have to do is look up to see what we need, where and how, and who we’d like to collaborate with. So, the great filmmaker died, and I dont know how, but Swinton and I went to the memorial service in St. James’s. We sang, and listened. Tramps lined the walls and the last few rows of the full church.
The Last of England is full of liferecording I made around London at this time. From Brick Lane to Soho, and I was not to be trusted. I recorded fanatically – the sampling workstation was working overtime…

2. Filming The Garden [Derek Jarman, 1990] at Dungeness, Kent.
Shingle shoot for “The Garden” by Derek Jarman

“James Mckay, the producer, had organised a weekend shoot down at Prospect Cottage. No one had a clue what was going on, except Annie the costume lady, and Derek and I just recorded the lot. There was a group of us ready for anything derek asked for/this is how it worked on Super-8 shoots. If Derek said “dya wanna be in the next scene”, hands would shoot up, or not, and off we’d go. It was a very busy few days, recording, and getting burned by flares, waiting for food and being in good company again. We were like a troop of warriors, being led by a mad genius artist. We filmed in the sea, tide out; Derek lying on a bed, four of us walking around him getting burned by flares; along the front of the huge Denge sound mirrors carrying fake guns dressed as terrorists; by the pylons out in the hinterland filming Christ and Doubting Thomas; by the radar lighthouse; setting up a traditional Punch and Judy man; outside the gates of the power station; here there and everywhere and of course Prospect Cottage. In this scene Derek is directing the papparatsi terrorists pestering Tilda as she appears as the Virgin Mary holding her newborn baby – just like real life really.”

“Mrs. Oyler lived next door to Prospect Cottage, and Derek suggested we went to see her and her daughter, Sylvia, because she was the oldest resident of the beach community and Derek’s neighbour… so we trundled about 15 yards across the shingle next door. Now Mrs. Oyler was rather deaf, but not stupid, and she was filled with extraordinary stories about living on the shingle as a young woman during the Second World War after moving there with her husband as a newlywed couple. She’d previously been in service in London. Tea and cakes please, yes! We only went to see her twice. I think we felt a little guilty because I’m not sure why we were asking her to tell her stories for us. Social history? Derek’s own thirst for knowledge? Who knows. But I knew that I’d use some of her voice in one of Derek’s films one day or other, and so we did, I think, perhaps in The Garden a few years later. She was a sweety, bless her. I’m sure the Oylers still live there now, but I’ll have to check with Keith.”

“This was recorded for the soundtrack of the film, The Last of England. We used parts of the recording in the film, but this is the unedited version. The gentleman in the recording is selling stolen cheap jewelry… I first started to record the sunday morning market when Derek asked me to get extras for Caravaggio. The wall at the beginning of the market was best. I got the two beautifull old ladies from Italy there. They were my finest East End find. But one morning I heard this amazing ranting, and what a guy! I couldn’t figure out how to record him without being seen. Always a problem when theft is involved. A few weeks later I went to see if he was still around, oh yeah there he was not far from the Doc Martin shoe shop. easy. I did the normal ‘microphone up the arm job’ pretending to listen. I never monitor recording out in the street. No earphones or such. Just straight top level no overload setting, and recorded straight onto a Sony Walkman Pro with condenser mic.”