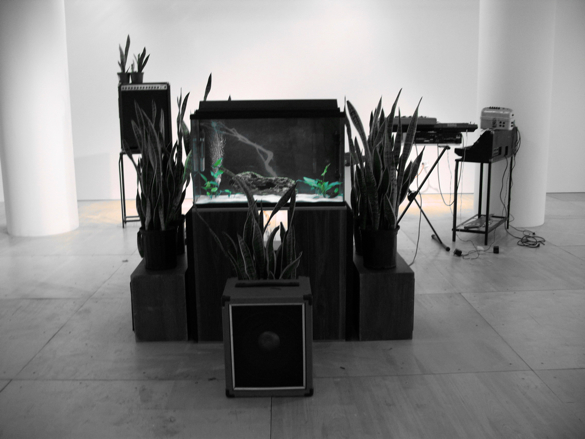 Alex Halsted is a fish. Specifically, the Gnathonemus petersii is an Elephantnose fish native to the Niger River in West and Central Africa. The fish has very poor eyesight and emits a weak electrical field from electro receptors covering its body. These receptors allow the fish to send a sonar-like electric pulse similar to the bat’s use of echolocation.
On 24 September 2009, David More, a sound artist who creates sound works by harnessing variations from the fish’s electric field, and I, executed experiments using the frequencies created by the fish as white noise to record for Electronic Voice Phenomena (EVP) and additional energy provided by Heidi Harman using Reiki.

The EVP recordings captured were not only very strong, but they seem to also refer to the fish, to David and also in some cases seem to refer to itself as the fish. Is it possible that disincarnate entities taping into available frequencies to communicate also pick up personality or other energies that define the identity of the being it’s taping into?

Included in this adaptation is a previously unreleased composition created using the frequencies of the fish as well as the EVP recordings captured and separately, the EVPs captured during those trials.

Whatever the physics of the phenomena are from those experiments, one thing we are sure of: Alex Halsted is a fish.