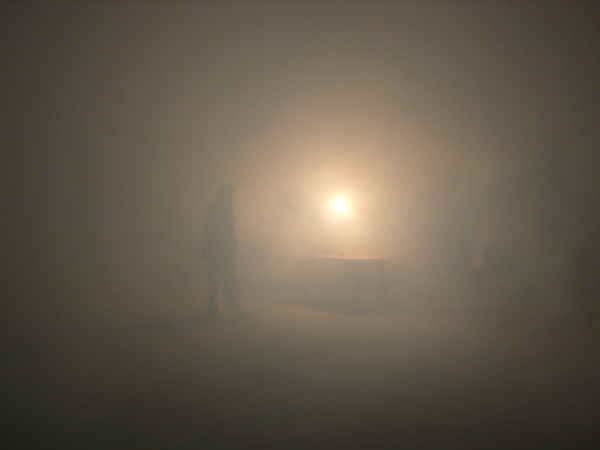 Nacre was composed for the experimental music festival ‘Skanu mezs’ in Riga, Latvia. The premiere of Nacre was held there on 23rd May 2009 in St. Saviour’s Anglican Church. [With thanks to Viestarts Gailitis.]

A video of the installation by Elín Hansdóttir and Hildur Guðnadóttir can also be viewed, when you subscribe to the TouchPod podcast of TouchRadio via the iTunes Music Store.

Nacre is dedicated to Hildur’s grandmother Margrét Guðnadóttir, who celebrated her 80th birthday in July 2009. The title refers to her name, since both the noun ‘Nacre’ and the name ‘Margrét’ mean ‘Mother of Pearl’.

Nacre is a written for 2 types of organs; a church organ and a light organ, therefore the score is twofold.

1. Church Organ/DNA:
Nacre’s score is in the shape of a 360 degree helix of a double strand DNA. This form was chosen as a connection to Margrét’s passionate work as a virologist. DNA forms the basis of inheritance in all organisms, except viruses, although DNA can be found in a few viruses such as herpes. DNA also connects grandmother and granddaughter, whereas it holds genetic information to be passed on from one generation to the next.

2. Light Organ/Newton:
The basis of the light organ is Newton’s color circle. He was the first person to connect colour to wavelengths of light and made the colour circle based on that theory. His circle consists of 7 colours and he assigned musical notes to each colour. Newton’s scale starts with red, to which he assigned the note D. The scale continues as a diatonic scale from D (also known as the Dorian mode); E=orange, F=yellow etc.
A light system was made specially for Nacre, which reads the frequencies being played on the church organ and triggers coloured lights for each note in Newton’s color circle. When the note D is played on the organ, for example, a red light shines in the light organ.
The light organ hangs above the audience. 70 LED lights are arranged in mirror modules that are held up by giant balloons. The floating lights are therefore multiplied and create a slight spatial distortion. 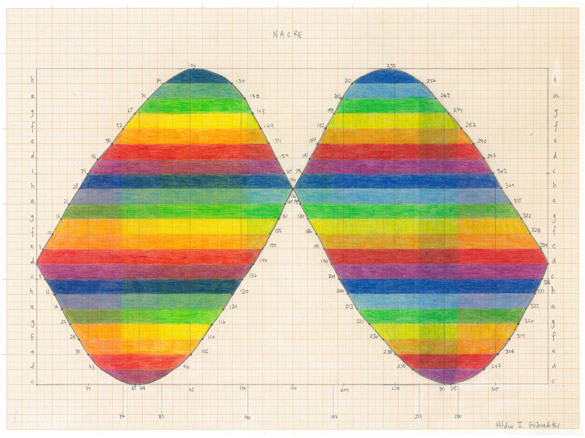 [more photos can be seen at www.hildurness.com]

Score/Performance:
The 21 angström width of the DNA is divided into 3 sets of Newton’s 7 colour circle. Each set of colours are played on different manuals of the organ; one set is played on the pedals, another set is played on the 1st manual and the third set is played on the 2nd manual. The 34 angström length of the DNA serves as a timeline for Nacre. The form of the DNA determines when each note should be played. When the DNA rises or falls to a note in Nacre’s score, it should be played until the DNA rises or falls on the same note, then the note is released. All the notes are indicated in the score with corresponding colours lighting up in the color organ. The result of this is a giant chord, where the overtones engage in a war as to which note shines the brightest in the light organ. Newton’s colour circle is also spread horizontally over the length of the DNA, starting at red with low frequencies and working its way up the frequency scale up to purple.
The “musical colours” of the chord are controlled by the 2nd performer next to the organist, who pulls or pushes the church organ stops in and out, creating an overtone resonance beat according to the horizontal colour circle. Starting with the lower stops and slower beat, working its way up to the higher stops and faster beat.