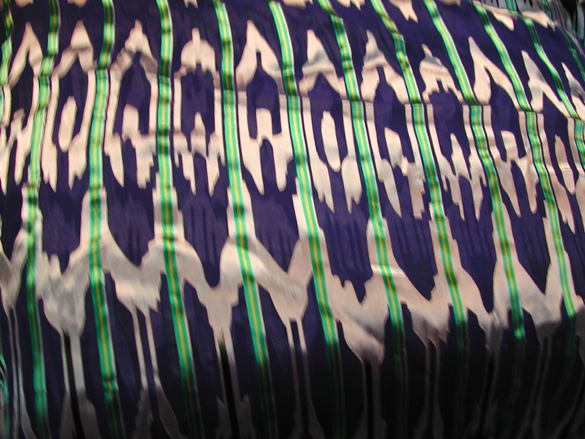 “Xinjiang (“new frontier” in Chinese) or Eastern Turkestan is without doubt the first extremely sensitive zone in China, at least in terms of ethnic conflict between the Hans newcomers and muslim minorities who have a longer history of occupation of those areas. Spread from Mongolia to Afghanistan, it is the biggest Chinese province. I was in the north western part of Xinjiang in the prefecture of ILI, called Yining outside of China and Ghulja by the Turkophones, in May and June 2009…”

“Xinjiang lives in a state of militaristic paranoia. It is still largely run economically and politically by some military “production units” (bing tuang), taking care of the lucrative oil business and more. The tension has intensified lately as you might know from news coverage of the Uyghur riots of July 5 2009. But even before Xinjiang lived in a state of emergency, the Hans (the main ethnic Chinese group, 92 % of China’s population) blaming dangerous separatist rebels and drug trafficking and basically the fear of terrorism, the others simply point at discrimination, venting their frustration. The Hans have arrived in great numbers since the 1990s for economic opportunities. Previously, the ‘colons’ or ‘forced labou’r sent there were pretty poor and that at the time were not perceived as a threat by indigenous groups. Things have changed drastically; Hans think now of themselves as superior because of industrialisation and the expansion of a consumer-based society which they intend to develop everywhere they can in China.

As a foreigner I had to endure lots of mistrust and police harassment. As soon as I arrived in a remote place, the local cops would show up keen to waste my time and eventually I had to use money to be free from an entire day of interrogation, being asked the same repetive questions by different cops (regardless of their ethnic groups, I could equally be harassed by a Han, usually the soft persuasive repetitive way, a Uyghur in the yelling way or the agressive Kazaks who insulted me threatening to put me in jail, kill me, anything they could do if they wanted to!) What a lovely place! We left as soon as we could and we were just in time to avoid the riots.
My Chinese lady is from there, Ili at the Kazakh border, and she had no idea it would mean so much trouble to be travelling around in search of local musicians in Xinjiang, an activity we have practiced together for the last 3 years in southern provinces of China without meeting any complications. In and around Ili, we ve met some fantastic musicians, farmers and professionals, the second group are aware of the contradiction between the will in the propaganda to promote ethnic minority music and the lack of motivation/realisation from the people in charge of cultural-political affairs. You basically end up in the ultra-communist system of having set up a system of civil servants/musicians whose task is to play on stage for the visiting delegations of communist party leaders from the rest of China. Any private Kazakh or Uyghur initiative seems to be stuck in the draws and corridors of bureaucracy.
Kazakh or Mongolian nomads continue to be delocalised from the mountains where they experienced the freedom to follow their customs, living on the grasslands at 3000 m, inside a kikzu (yurt) and having their economy based on horses, cattle and sheep.

An amusing detail is what I call the “no jetlag” policy; in Xinjiang, the Hans function on Beijing time while the others follow the time of the sun 2 hours later. When you ask the time to a Han in the street, You get Beijing time 2 hours ahead of ‘reality’. The Hans have lunch at 2 pm when everyone else has lunch at 12 noon, but they are still eating at the same moment