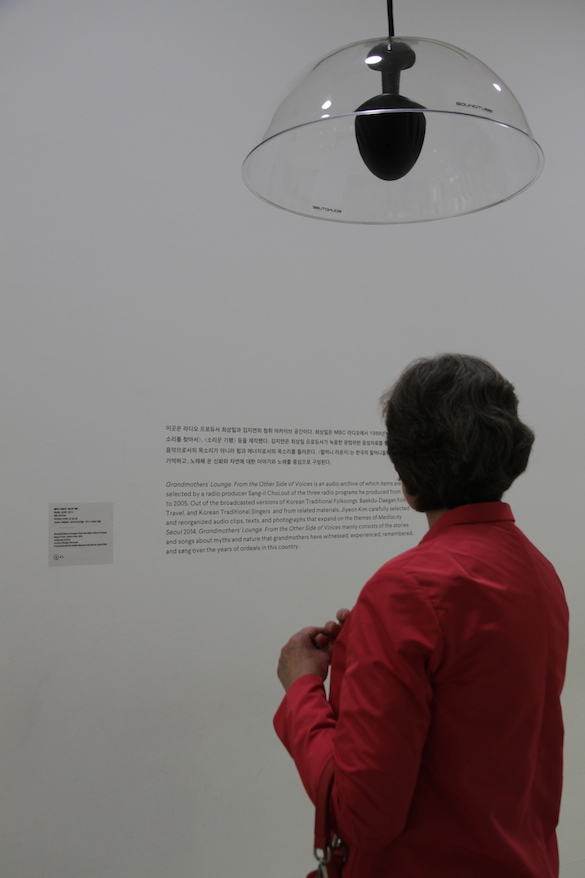 ‘Grandmothers’ Lounge – From the Other Side of Voices’ is a joint work of radio producer Sang-il Choi (KR) and sound artist Jiyeon Kim (KR), commissioned by SeMa Biennale MediaCity Seoul 2014. Largely based on Sang-il Choi’s anthropological audio recordings of folksongs and stories of grandmothers from South Korea, Jiyeon Kim made this sound installation adopting 3 directional speakers. This mix is especially prepared for TouchRadio.

Grandmothers who had lived in mountain villages used to play with imitating bird’s call. Songs about birds and imitative sounds of birds call were passed on orally. For the people who lived in mountainous areas, birds were believed to be the reincarnation of the dead, who had oppression and resentment during their lives. Most of the words and lyrics concern listening to one’s sorrows and comforting one’s soul. You can hear calls of the lark, owl, cuckoo, wood pigeon, pheasant, nightingale, etc mimicked by grandmothers from different mountain villages with rustling leaves and folksong on birds.

A mix of grandmothers’ confessions during the act of praying with songs used in exorcism rituals. Sounds of metal resonance, water flow and feedback were added to accentuate an aspect of their lives – a shaman in their own families.

This mix starts with one of the old ladies saying, “…I can’t even sing.” As song is assumed as a centralised and capitalised epic, marginal unsong elements are often neglected and erased. With chopped sounds and refrains from mainly labour folksongs, I focused on ‘unsung elements’ (breaths, humming, laughter, shouts, etc.) to be extended into another kind of song. Grandmothers’ chorus would not be finished until they stop breathing.