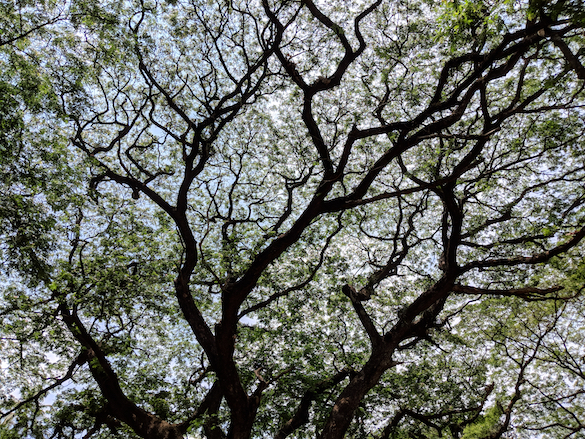 This recording is made off the back balcony of the Cube Gallery in the village of Moira, Goa at around 8:15pm on March 17 (St. Patrick’s Day), 2018.

The balcony looked out onto an area of open land, with a Hindu temple on one side and an old Portuguese-style cathedral on the other. I am struck by the merging of layers of sound in this scene — birds and insects, but also sometimes traffic (though the road is distant), voices, power tools and non-power tools, dogs, and various unknown activities. In the middle of the recording, an unseen train passes and somehow overtakes everything for a moment. There are sounds I cannot identify no matter how hard I listen to them.

This piece is composed by all the forces that had assembled themselves in that place at that time, on the edge of night.

Many thanks to Satinder Singh and Eric Patrick for making this recording possible.