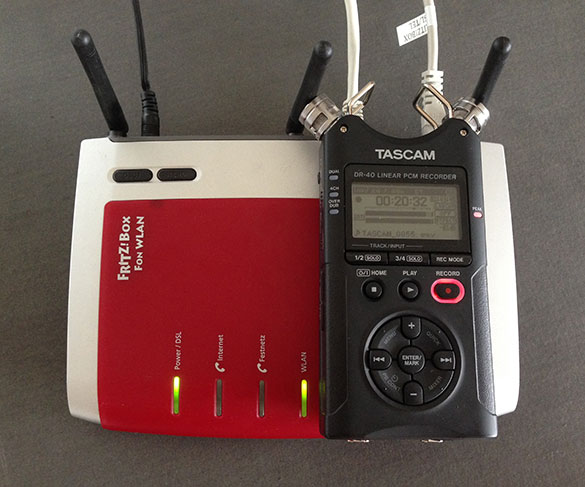 Since technical evolution tends to unfold rapidly, human beings have not been able to evolve a (forewarning) sense of new forms of technology (for instance to detect radioactivity). Electronic emissions are also not sensually detectable. No one knows exactly how the technology of “wireless transmitting devices” affects humans. Radio, television, radiotelephones, mobile phones, GPS, computers, bluetooth and WiFi routers flood every place on earth with countless electronic waves.
“Recordings” of a standard WiFi router serve as the basis for the “Fritz Kiste”. Actually one can’t really speak of (audio) recordings since the electronic waves of the WiFi are soundless. Their energy triggers the sensitive microphones, since these have been placed directly at the remote transmitting antenna. The recording – made with a D-40 Tascam, equipped with one microphone for each antenna – tapes the different transmission signals on the right or on the left channel as a “stereo signal”.

The WiFi router transmits at 3.4 MHz and so generates 3.4 billion cycles per second. The actual reception of the signals – eg. recorded during the transmission of an email with an image attachment – are only a few seconds long, but are prolonged through ever deeper analysis. The fragmentation was achieved via different processes, digital and analog, and via ‘deceleration’. Thus fragments of a second were distended to minutes in length. In this way the router’s timing-in-seconds, much too fast for human perception, becomes open to scrutiny.

The results are partly ‘technoid’ by which sounds are very much dependent on the timing. Sounds emerge at a high transmission activity; send-pauses sound more ‘ambient’…