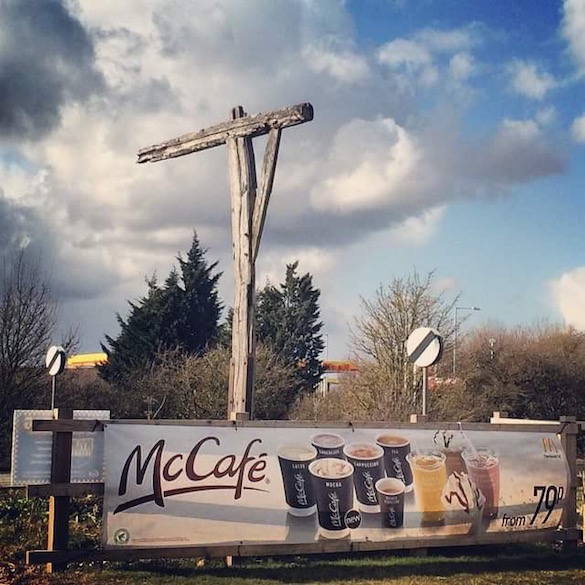 The word ‘gibbet’ is used both to refer to an executional structure and to a hanging iron cage that used to display the remains of executed prisoners; when someone is thusly displayed, it is known as ‘gibbeting’.

Recording the wooden gibbet in 2012, believed to be haunted burial site and located at Caxton in Cambridgeshire, to capture the sound of the gallows wood (elm) and saproxylic (dead wood) invertebrates (beetles) that lived within it was a challenge because of the vast amount of traffic that passes by. It is located beside a busy roundabout (A428 to Cambridge) and I initially found it difficult to capture the wooden gibbet creaking and moving in the way I had envisaged. I therefore used contact microphones to get inside the construction. I was inspired by the grim history of this location, the place of multiple murders and capital punishment, and also from reading about Bernie Krause (b.1938) who, on the CD included in his wonderful book “Wild Soundscapes”, explains that “recordings are an illusion… the best microphone systems and recorders cannot possibly reproduce exactly what our ears hear in the holophonic way that we hear it” (2002). He documented acoustic environments that faced dramatic change or extinction but often needed to recreate the sounds of nature by double tracking or changing microphone placement.

This location has changed dramatically recently as a McDonalds opened a fast food restaurant on this site recently.